Could Formal Music Education Be Limiting Your Child’s Potential?

Many parents with children enrolled in formal music classes measure their children’s progression based on the exams they take until they are proficient. While this is a practical and effective way to evaluate their musical growth, it shouldn’t just end there.

While formal education is important, it does not tell the entire story of the music education sector. Young people today engage with music in diverse ways, and there are significant achievements gained by those outside the formal system. A good place to start though, is to understand the differences between formal and informal music education:

Here, three domains of learning have been identified; formal, non-formal and informal:

• Formal learning is identified as intentional and occurs in an organised and structured environment with clear learning objectives, typically leading to accreditation. In music education, this would typically be the state-run system including schools and universities working towards theory-based GCSE/A-Level/BA in Music, ABRSM Grades and some practical-based qualifications such as the Rockschool Award.

• Non-formal learning is also identified as being intentional, but is embedded in activities not necessarily designated as learning or accreditation. In music education, this could be learning something about you such as teamwork or management skills in a recording studio or music ensemble. This is typically seen in vocational and adult learning working towards continued professional development, apprenticeships and engagement programmes.

• Informal learning is identified as unintentional learning taken from daily experiences in work, home or leisure, with no structured objectives. In music education, this would likely be seen in home-based ‘bedroom producers,’ community choirs, youth centres, recording studios and music venues. Via Music Mark

Striking the right balance between formal and informal music engagement for students allows their growth to be wholesome. In recent years, this has particularly been emphasized for young children, with activities such as group instrumental lessons and music hubs becoming common.

A lot of attention has been given to the benefits gained by young children through engagement with music. For instance, a recent study by the University of Queensland showed that music participation at home improved numeracy, attention and pro-social skills to a much larger extent compared to shared book reading.

However, these efforts don’t seem to be sustained at later stages of their musical progression:

But the progression from that point becomes fragmented – a bit like a first date without a follow-up – and there’s a whiff of snobbery towards those who provide routes to musical progression that aren’t measured by a pass, merit or distinction. Those who wish to follow the formal exam route should be encouraged and welcomed, but so too should the child who wants to play in a band, sing in a choir or learn an instrument just for the hell of it. Progression – that is, getting as good as you can – is an important part of all routes. Via The Guardian

This by no means disregards the importance of formal music education, and the many benefits it offers that a child on informal music education alone may not enjoy. The biggest problem is that many budding musicians are unaware of the many opportunities they have to learn and participate in music. 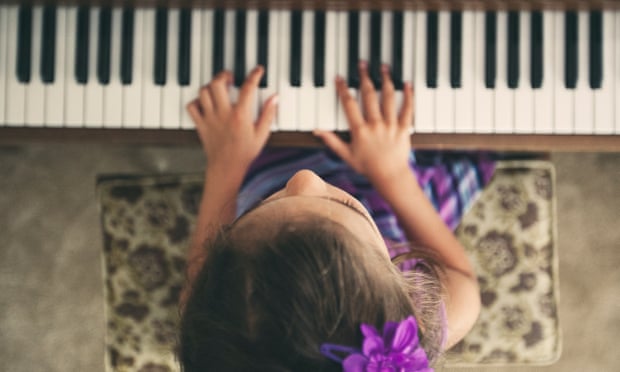 But in some quarters, there’s still a sense that broader musical learning is a side issue. Like confetti, you can sprinkle music across the community, so long as it’s brushed away before the “real” concert begins.

The most successful and enlightened ensembles and organisations – and there are many world leaders in the field in the UK – recognise that the driving force for creativity, understanding and engagement is learning and participation. It’s central to their artistic output. Via The Guardian

The secret is to make the musical experience enjoyable at every stage.

The key to lifelong engagement in music is enjoyment, whether young music enthusiasts ultimately become professional musicians, amateur music-makers or keen listeners. The challenge is to ensure that every child has the chance to realize their potential. Via The Guardian

As such, the emphasis should not be so much on the best way to learning music, but more on ensuring that children and young people are engaged in excellent music in different settings. This does not require a complex solution.

Simple activities including singing, reading music, access to both formal and informal musical tuition, the use of digital technology, attending different types of live performances, creative involvement in composition and performing their own work will go a long way in making this possible.

Quite simply, we need to get much better at telling people about opportunities for musical learning – and where to find them…

If we don’t close the fault line between formal and informal approaches to learning, then the inequities will prevail and we will fail many young people with musical talent. Via The Guardian

Playing music with toddlers could benefit their development even more than shared reading, according to University of Queensland research. A UQ-led study has shown that music participation at home improves numeracy, prosocial skills and attention over and above the effects of shared book reading. One of the study leaders and Head of UQ’s School of Music Professor Margaret Barrett said parents were asked to report on shared music activities when their child was two to three years old and a range of social, emotional and cognitive outcomes were measured two years later, when the child was four or five. Via University of Queensland

Musical learning in England at a crossroads – report

A new report on the provision of musical education for school-aged children and young people in England was published on 25 September 2015.

Musical Routes: A New Landscape for Music Education is an independently commissioned report into the provision of musical education for school-aged children and young people in England. The report was written by Sarah Derbyshire MBE in partnership with the Royal Philharmonic Society. Via Music Stage