Adam Parkinson is an honours graduate of the Ontario Institute of Audio Recording Technology in London, Ontario. As a student he thrived,  learning under some of the most talented engineers and producers in Canada with credits ranging from Beck to The Rolling Stones. As an OIART intern, he worked even closer with these mentors, further honing his skills and developing a passion for teaching in the music production and engineering space. Since then, he has worked in studios throughout the GTA and assisted for acclaimed Canadian engineer and producer Julius Butty at Arc Recording Studio. Ultimately, his passion for music production and teaching converged here at Merriam. Heading the new Merriam Music Production Academy, he intends to help foster the development of the next generation of music creators.

Mike Siracusa has been performing for over 33 years. Over that time, he has toured and recorded with many artists. During Mike’s extensive career, he’s had the good fortune to perform with Alex Lifeson, Orianthi, Rik Emmett, Duke Robillard, Bernard Fowler, Dave Grissom, Andy Timmins, Wayne Krantz, Lorne Lofsky, Gary Hoey, Sue Foley, Guthrie Govan, Johnny Highland as well as many others.

Mike also produces, arranges and composes for many bands, artists, TV and radio shows. He is currently the Creator and Director of the Band Chops Program at the Merriam School of Music where he has been a member of the faculty for the past 17 years. Many students have benefited from Mike’s teaching experience through songwriting, drum and guitar lessons. Several have been accepted into some of the most prestigious colleges and universities in North America. Many are now enjoying successful careers as musicians.

Mike Siracusa has also been writing and recording his own music for over 35 years. 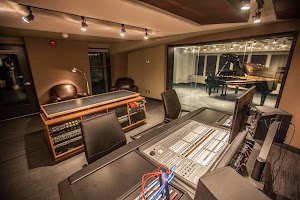 Jeff Salem
20:23 03 Feb 18
I have had the great opportunity filming three different video projects with Lee Parsons at Merriam Productions. Total pro all the way. Lee and his staff are amazing. Very experienced and passionate on what they offer and do. The recording studio and theatre are top notch 100%. Great lighting, filming and editing as well. Its a one shop packaged deal. I would highly recommend them to any artists at all levels for recording and filming.read more

Stephanie Kim
09:46 12 Dec 17
I had a last-minute audio/video recording that needed to be quickly completed. Lee the videographer and Mike the sound engineer at Merriam Productions kindly squeezed me in for a session as soon as they had a cancellation. Lee put me in touch with a fabulous piano accompanist who is on faculty at the Merriam school. The recordings turned out to be top-notch, both in audio and video quality. When I asked for a simple, minimum-effort shot, Lee went the extra mile and created a beautiful picture with the setting up of his camera and the LED lights for a special touch. The sound engineer completed a late-night edit as per my request and immediately sent over the files with the changes. These life savers delivered the final product to me in one day-- I believe that is almost unheard of in the music business. MOST importantly, Lee was very prompt in replying to my e-mails which really made the process stress-free and did not send me to look into other studios. I look forward to bringing future projects to Lee and Mike and hopefully they will accept with open arms again.read more

Peter Tong
05:01 08 Feb 18
If I could give MORE than 5 stars, I would! With 2 videoshoots under the direction of Lee Parsons, I can vouch for his talent, instincts & professionalism. Next video, I'm coming here again! Lee, you RAWKKKK!read more

Emily Kemp
05:48 08 Mar 17
Beautiful studio space. Lee and Mike are professional and sweet, they make you feel very comfortable. The recording studio has a gorgeous grand piano that is tuned for each session. On the main floor The stage is well equipped with video cameras to give you many angles on a live performance and can be hooked up to the recording studio board so you still get great sound with your video. This was a wonderful experience and I am so happy with the final project. I highly recommend Merriam Productions for your next recording project 🙂read more

George Eke
18:44 31 Mar 17
Oh man, what great things can I say about Merriam Productions that hasn't been said already?From the moment I walked in, I felt welcome. Their piano showroom is amazing and the ambience made me feel right at home. I checked in with the receptionist who knew who I was already! Kinda amazing, right? I had a studio session booked for 2 hrs so i was escorted downstairs by the Studio manager Lee, who is just an awesome guy. He made sure to explain everything about the studio to us, had all the equipment prepped and ready to go for us so we had a very smooth and efficient studio session. He even went the extra mile to provide LED lamps for us to use for some videos in the studio. Best of all, their prices are very affordable for the quality you get there. I will definitely be booking my next studio session here!read more

Emerson Del
00:39 14 Nov 18
I like their selection of pianos and the employees are excellent

Andrew Sabiston
22:48 01 Feb 17
A first rate facility staffed by wonderfully caring professionals. As a producer who has been in a lot of recording studios and sound stages over the years I was thoroughly impressed by our entire experience at Merriam - from the first minute of production through the last second of post. Lee was a joy to work with and made certain that we left with exceptional videos and recordings. I would recommend Merriam Productions to any artist, band or producer looking to make a top quality product for excellent value.read more

Kale
17:28 12 Mar 17
My band Quarter Heads recently shot a music video at this fine state of the arts stage production setup at Merriam Productions and we couldn't have been more happier with the results! Lee, the manager there was extremely accommodating towards the band and very knowledgeable. Excellent service and affordable pricing.read more

James Kovacs
14:01 28 Feb 17
We have filmed a number of music videos and recorded a number of songs at Merriam Music using Merriam Productions. I can't say enough great things about Lee Parsons and the entire set up and crew from Merriam Productions. It is a wonderful venue that can create almost any mood that you maybe looking for. The recording studio has a warm and effective set up, and the recording engineer Mike Tompa, brings all of his recording experience to each song, and the results show. Very professional, and more importantly there is a feel and vibe that is creating a new sound and look which I think will be a force to reckon with in the Canadian recording and video scene. Below is Kathleen Kovacs in a video shoot at Merriam; one of Canada's up and coming musical talents, making great use of this hidden gem, Merriam Productions.Thank you again, Lee. Jim Kovacs and Kathleen Kovacs.read more

John McLelland
19:02 01 Dec 16
A great experience working with Lee Parsons, Mike Tompa and crew. My music project recorded our newest CD live off the stage at The Merriam Theatre and they delivered the results a promised. The videos ended up looking awesome thanks to the great editing skills of Lee and his crew and Mike held down the audio end. Overall very pleased and am happy to recommend Merriam Productions for audio/video project completion to anyone wishing a high end result to their recording projects.read more
See All Reviews Write a review