Hats Off to Music Teachers!

Historically, teachers generally received a lot less recognition than other professionals. That’s a fact most if not all of them learned to live with. But it didn’t end there. Teachers in the arts received even less recognition than their science counterparts, and were often looked down on because arts subjects were considered inferior to science subjects.

Thankfully, this has somewhat changed over the years, and while it’s still an uphill journey, arts teachers today will every now and then be recognized for the invaluable role they play. Today, music teachers in particular are recognized during annual teachers’ award events in countries like the US and Canada.

The Grammy Awards is America’s biggest awards event recognizing the musical achievements of popular artists and performers. The Music Educator Award was established to honor the teachers that help build the foundation on which the accomplished leaders in the music industry built their careers. The award targets current educators making significant and lasting contributions the music education sector as well as ensuring that music education is maintained in schools.

Last year’s recipient, band director Jared Cassedy of Windam High School in New Hampshire, said the Grammys was more than a “once-in-a-lifetime experience,” and still serves as a reminder of his role in the “greater cause of music education.”

“It’s so much more than just teaching kids to perform and collaborate, it’s really looking at my students and my program as a means for instilling a passion to work towards their own individual goals and interests,” Cassedy said. Via CBS News

Similarly, the MusiCounts Teacher of the Year (MTOY) Award in Canada recognizes and honors that dedicated music teachers that are responsible for keeping music alive in the education sector for the next generation. The award is intended for an exception teacher that has impacted the lives of students as well as contributing to music advancement in the community.

Not all music students will delve into a music career, but they all remember the impact their music teachers had on their lives. Listing the different ways that music teachers have a positive influence on their students is a good place to start.

Even for those of us who don’t quite manage to make a professional career out of musical performing, there are no shortage of things that we can take from our school music lessons and the teachers who delivered them.

Here are ten things music teachers should be thanked for.

1. They taught you that it’s ok to make mistakes, and making them is how we learn and grow as a person. That’s something useful for life in general, not just music.

2. They taught you to believe in your abilities and stay calm under pressure. Again, not bad qualities to have regardless of what you’re doing.

3. They encouraged you to do your best and push your limits.

4. They destroyed the “practice makes perfect” cliche. In reality, a copious amount of practice is not enough to become a great musician. You always need to find a way to make yourself inspired.

5. They show tremendous dedication, including by taking after school lessons, running school orchestras and clubs, and planning activities. A lot of this additional commitment is never recognised in a teacher’s working hours or salary.

6. They made mathematics easier to understand. After all, its simpler to grasp the concept of two quarter notes fitting in to a half than trying to stare at a badly drawn diagram on a blackboard.

7. They pushed you to take responsibility for your actions, by practicing for your weekly piano lessons or remembering to bring your violin to school.

8. They opened the doors to something which has been shown to stimulate the entire brain. As we noted in a recent article, a vast quantity of scientific research has proven the positive effects of music in many areas.

9. They stressed the importance of always looking for ways to improve. Whether or not you’re still playing piano today, a healthy dose of self-criticism can only be a good thing.

10. They showed you that music is a lot more than just something you listen to or have on in the background. It’s there to be experienced. Via CMUSE

Although music teachers find their jobs rewarding, they also have to grapple with a lot of inaccurate stereotypes that lead to very unpleasant situations for them. Most have to do with the assumption that music is of less value than core subjects like math and English, or even worse, the idea that anyone can teach music. Here are just 10 of the many things music teachers hate to hear:

1. I’m behind with maths. Is it ok if I miss this class so I can catch up?

2. How come she didn’t get an A for that piece? I’ve heard it and it sounds great.

3. Are we playing any music today?

4. Why are we listening to this anyway? Just explain it to me.

5. He didn’t have time to practice this week, he had so much homework from the more important subjects.

7. I forgot to bring my violin, so I’m doing some homework instead.

8. She’s been taking lessons with you for around a year now, but she doesn’t seem to have learnt anything that I can see.

9. It must be an easy life just sitting and listening to kids play music all day. It’s not like you have to organise a scientific experiment.

10. I know it’s the final rehearsal tomorrow night, but there really is nobody else who can take care of my neighbour’s cats. Via CMUSE

1. You know you’re a music teacher if it’s totally normal
to play Christmas music in October.

2. You know you’re a music teacher if you more often find yourself
humming Yankee Doodle than Taylor Swift.

3. You know you’re a music teacher if you have to explain to everyone
that yes, this is your real job.

4. You know you’re a music teacher if you find yourself trying to
correct bad television performances.
(out-of-tune national anthem broadcasts, anyone?) Via Ohio MTA 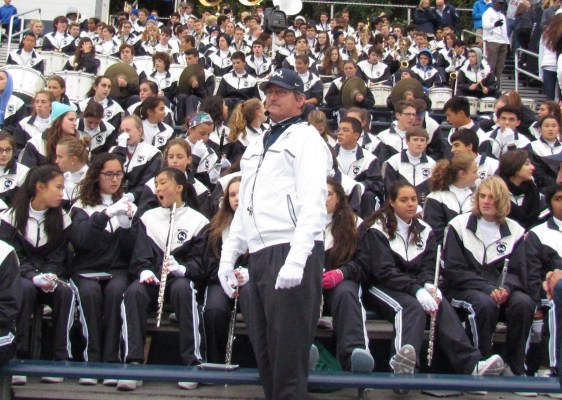 Frank ‘Chip’ Gawle is more than just one of Wilton High School‘s favorite teachers and the leader of Fairfield County’s largest high school marching band. He’s now a giant step closer to the 2016 Grammy Music Educator Award. In May, it was announced that he’d made it to the quarterfinals with 212 other educators; now yesterday came word that he was one of 25 music teachers selected as a semifinalist, winnowed down from an original field of 4,500 nominations.

The Music Educator Award was established to recognize current educators (kindergarten through college, public and private schools) who have made a significant and lasting contribution to the field of music education and who demonstrate a commitment to the broader cause of maintaining music education in the schools. Via Good Morning Wilton

Adriana Lopez of Public School 22 in Staten Island, New York, was recently diagnosed with breast cancer, and the school’s epic chorus gave her a heart-wrenching performance of Martina McBride’s “I’m Gonna Love You Through It.”

The group always performs a special song at the end of the year with director Gregg Breinberg. This year it was all about Mrs. Lopez.

They said on their Facebook the performance was “for a dear friend and teacher at PS22 whose bravery and dedication to her students amidst a difficult fight with breast cancer has inspired us all… We love you, Mrs. Lopez!!” Via BuzzFeed