‘Sliding’ is a unique and extremely popular legato technique and has equal significance for experienced guitarists and novices. Slides facilitate the effortless blending of two or more musical notes and aids in heightening guitar melody. Slides also enable your fingers to navigate seamlessly from one particular spot to another, while moving along the fret board.

One of the most awesome facts pertaining to sliding is that, it is relatively simple to grasp. You are sure to experience greater ease and confidence with the passage of time and dedicated practice.

Sliding into your target note

The very essence of sliding lies in the application of the right amount of pressure in order to enable effortless and quick transitions. Sliding into a target note is a swift one and presents an auditory effect of a single note instead of two. Start sliding from a couple of frets below the target note.

Sliding out of a particular note

In order to slide out of a guitar note, hold that particular note throughout its duration, slide your finger down your fret board and then bring it up again following a few frets. Use the first string and ninth fret note for picking the string normally. Allow the note to ring and slide your finger down while steadily releasing finger pressure. Withdraw your finger after a couple of frets.

The term ‘long slide’ refers to ascending or descending slides which cover almost the entire length of the neck. The player releases finger pressure and consequently removes his/her finger from the string located at either end of the neck.

If an individual does not restrict the hand and release finger pressure while playing a long slide, he would end up hearing a stopping point. And if the player releases the string, then an open string would be heard.

Increasing your comfort level with these simple exercises

Practicing a number of basic sliding exercises immensely helps in raising your comfort levels. Engage in single string exercises where you are required to make use of your ring finger and index finger alternately for every slide, as you gradually ascend the fret board.

Dealing with the challenges of sliding

Even though sliding is a remarkably simple technique which can be grasped within a short span time of time, beginners might find this concept a bit challenging during the initial stages of learning.

Here are some fundamental strategies for steering clear of these challenges and enhancing your progress rate:

Do keep these useful tips in mind so that you can anticipate some awe-inspiring and really enjoyable guitar playing sessions in future:

This amazing legato technique is frequently adopted by lead players in a large number of musical pieces. The underlying reason is that slides possess the amazing power of providing guitar notes with a fresh lease on life. 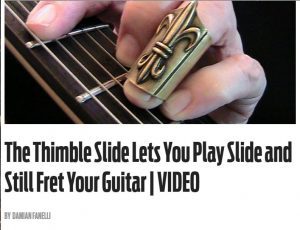 A new item for guitarists has launched a Kickstarter campaign—and we thought you might want to
know about it.

Developed and patented by guitarist Cole Coleman, the Thimble Slide is designed to be worn on the
tip of your finger. Yet it allows your fingertip to pass through and exposes enough of it so that
you can easily fret your instrument—while still wearing the slide.

You can play linear parts, chords and riffs and take that slide solo and go back to playing
chords, etc., without a pause in the same song. You even can develop mixed solos and parts—sliding
and fretting. Via Guitar Player

Bonnie Raitt and the Fugitive Emotions Evoked by Slide Guitar 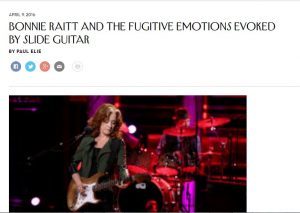 Bonnie Raitt has dodged the crush of fame that did in the Eagles; she has beaten the devils that
snared Warren Zevon, found the third act that eluded Linda Ronstadt and Jackson Browne, tended to
her vocal cords better than Joni Mitchell, escaped the undertow of the sixties that holds Crosby,
Stills & Nash, and kept clear of the Rushmore-y eminence now granted Neil Young. At sixty-six,
she’s the real survivor of the California rock scene of the seventies, and to see her perform, as
I did, at the Beacon Theatre, the other night, is to see—to strange and powerful effect—an artist
from the album-rock era fully intact. Via New Yorker 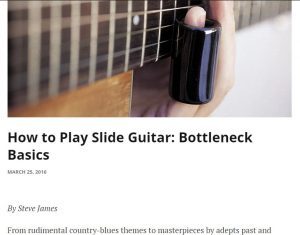 From rudimental country-blues themes to masterpieces by adepts past and present, good slide guitar
playing is seldom busy. At its best, it combines economical phrasing with special attention to
pitch and tone. Let’s look at some of the basics of playing slide in open-D tuning (DADF#AD).

First, your slide should be about as long as the pinky of your fretting hand, slipping comfortably
on your finger. The ends should be smooth, and some guitarists prefer a slight flare toward the
outer end. To play with your slide, place your fretting/sliding hand over the fingerboard as you
would normally. Avoid pointing your other fingers away from the guitar and keep your thumb behind
the neck. Tilt the slide slightly outward so it contacts the first string only, and try playing
the major scale in Ex. 1. Via Acoustic Guitar